At this time of year, the world in general (and Grantham in particular) can seem a rather bleak place. Trees are nothing but bare boughs, the grass is wet and sodden underfoot and the only flowers to be seen are those in the supermarket containers or the florists’ window. But there is a notable exception to this general rule. 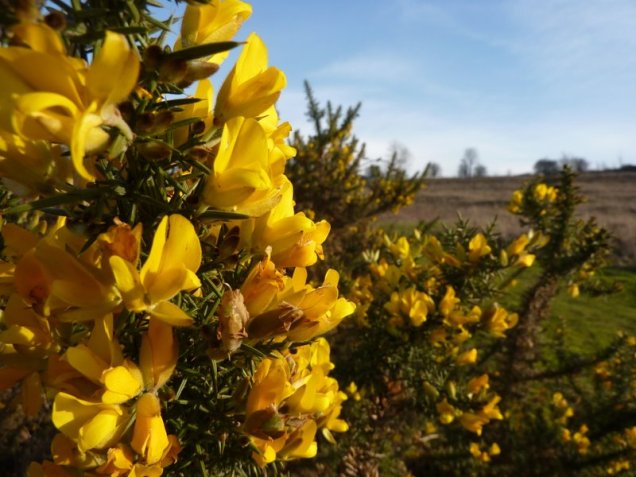 On the south-eastern edge of the town, the fields rise up above the estates at the end of Gorse Road. This area is described as ‘Gorse Lawn’ on the OS map and rises up Hall Hill, on the edge of the Hills and Hollows. Walking over a small stile and scattering rabbits which are nibbling the tips off grass poking above the frost, you are soon surrounded by gorse – latin name Ulex europaeus. Even now, in the middle of January when the bulbs are only beginning to push up through the earth, the gorse growing on this hillside present yellow flowers in abundance.

You will almost certainly know gorse, if not by name then by sight. It is one of our prickliest shrubs and grows not only on heaths, where it compliments the purple heather beautifully, but on all kinds of waste ground, flourishing where the soil is shallow and nutrients are scarce. It loves sunny spots and often grows on sandy soils. It is a member of the pea family along with garden peas and beans, garden flowers such as lupins and even trees such as laburnum. The clue is in the lipped, irregular flowers.

Perhaps the most interesting question is quite why the gorse is flowering so profusely in the dead of winter. Flowers are clearly designed for greater things than simply decorating our houses, and butterflies and bees aren’t just taking a rest when the alight. The flowers attract insects through the offer of nectar and use the insects to pass the pollen, from one plant to the next and, so, fertilise them. The flowering season then is designed to coincide with the warmer weather, when most of the insects take to the air. Some plants flower early, some late, some in the middle, but almost none choose to bloom at the one time when insects are in such short supply as mid-winter. So why is the gorse such an exception?

A wonderful paper from the Linnean Society journal in November 1869 looked at a number of species which flowered at this most unusual time and concluded that the flowers are all arranged so that they can fertilise themselves without even opening the flowers, thereby ensuring that fertile seeds can be made even if the snow arrives and remains, and if no insects come to call. This ability of gorse to produce lots of clones of itself is part of the reason why it is such an invasive species in countries such as the United States.

This ability to reproduce without insects allows the winter flowering strategy without risk of a barren year, and on warm winter’s days when insects emerge, the gorse has very little competition for their attentions as it is one of the very few options on the menu.

That goes some way to answering the question of how, but it does still leave the why. Why not? isn’t really a good enough answer. This seems to have received attention from researchers only relatively recently. A group of French Researchers identified two main flowering strategies in gorse populations (as there are of course plenty of flowers to be seen in the spring and through the summer too) which seem to reflect two different ways of avoiding losing their seeds to little seed-eating weevils of the Exapion genus. One strategy is to avoid the weevil and, by flowering in the dead of winter in conditions that are too harsh for the weevil, they do just this. Winter flowering specimens tend to produce a smaller number of flowers through a long winter season, so maximising their chances of flowering through a warm spell when pollinators emerge. The other strategy is to produce so many seeds that there are many more than the weevils can consume and this is what the spring flowering shrubs do, producing very large numbers of flowers over a much shorter period. A later paper identified a genetic basis for this – that gorse seeds from a winter flowering specimen tend to produce offspring which do the same.

On a more practical note, gorse flowers can be used to make wine and winter may well be the best time to pick them if you want to do this – for the very reasons outlined above, you will spend much less time picking little black insects out of your harvest, although the flavour is less intense than spring and summer flowers! You’ll appreciate the slight reduction in workload though as gathering enough is rather a laborious process and don’t forget the gloves as being prickled by the sharp spines soon gets old. And if wine isn’t to your taste, there are lots of recipe’s for gorse cordial out there too.

As well as admiring the gorse, a wander up the hill gives you a wonderful opportunity to look down on Grantham, the skyline dominated by St Wulfrums. As the weather warms, you’ll be joined by a range of songbirds as the gorse provides a fantastic nesting site with its tangled mass of trunks and branches. And look out for a black rabbit amongst those grazing as you approach!

3 thoughts on “Why does gorse flower in the winter?”