Bumblebees are fascinating insects and I have been meaning to learn more about them for a long time. I’m not sure that it doesn’t have something to do with the fact that they looks quite so similar to colourful bats up close… there is something about their furry round bodies which is rather reminiscent!

It is still very early in the season but most of our UK species respond to conditions rather than dates and when the sun is shining and the weather is mild, many hibernating species will come out of torpor and begin their spring routines. I have recorded pipistrelle bats in flight over the last week; the birds are certainly thinking about nesting with the early species such as long-tailed tits gathering nesting materials; and there was quite a gathering of bees on a very early flowering blackthorn on Monday lunchtime.

I managed to get a couple of photographs of this bumblebee and decided that this would be the first ID on my path to learning more about these species. And it looks as though I picked quite a good one – my tentative ID of a tree bumblebee (Bombus hypnorum) was confirmed by helpful tweeters @sbd08simon and @ed_p_wildlife. Apparently there is no other bee which this species can easily be confused with – the colouration is just black and buff-brown with a white tail. No coloured bands! This bee has quite a simple pattern compared with the multitude of variations which other species seem to manage! This guide from Bumblebee Conservation gives a great introduction to identifying bumblebees. 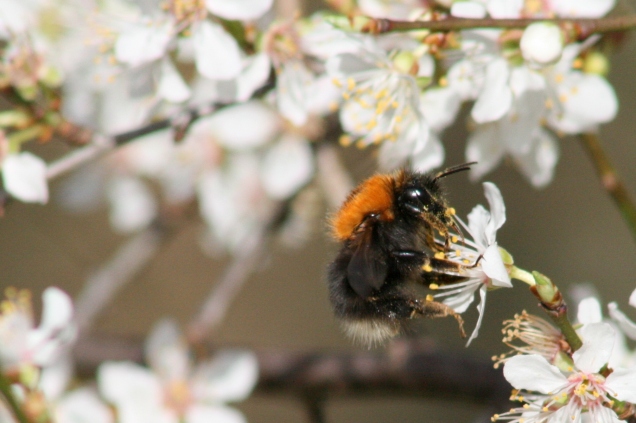 Although I am, as already confessed, no expert, I believe this must be a queen out foraging and potentially searching for a nesting site. The queens emerge in spring (usually March or April) and scope out potential nesting sites before laying their eggs. About six weeks later, the eggs hatch and the entirely female workforce splits into teams, some foraging for the colony, others staying in the nest to do the housework. Later in the year, ‘reproductives’ are produced – these are virgin queens and/or drones. The drones will die after mating with a female but the queens will hibernate through the winter and emerge when the temperatures warm up in the spring and the cycle can begin again. I would therefore suppose that my bumblebee feeding in February is a queen freshly emerged from a relatively short winter’s sleep.

Tree bumblebees are so called because of their habit of nesting in trees – either in woodpecker holes or more frequently, in nest boxes. Like most species, they have adapted to inhabit the world we have created around them and can also be found nesting in houses, in soffit boxes and similar features. Some other species of bumblebee will occupy similar niches but the preference for these tree (or tree-like) nesting sites is most notable in the tree bumblebee. Many other UK species will nest underground and you can often see them bumbling into the undergrowth towards the entrances to their underground homes.

Tree bumblebees are a relatively new additional to the UK’s fauna – they first appeared in Wiltshire in 2001 and have been spreading north every since. It is believed that they are natural colonisers which have established under their own steam, much like the collared dove which was a rare vagrant until the 1950’s when they were first recorded breeding here and now grace most garden bird tables across the UK. The invasion of the tree bumblebee appears, so far, to be benign with no observed impacts upon existing native bee populations and its spread appears to be continuing with the first recording in Scotland last year.

If you want to read more about the tree bumblebee, there is a very informative factsheet available from Bumblebee Conservation. 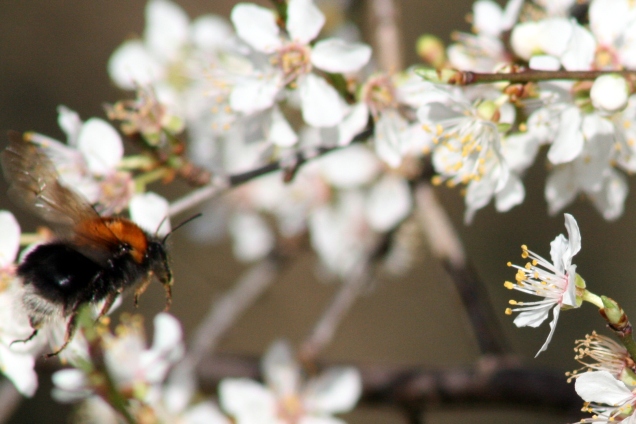