This blog post steps outside of my usual UK sphere and across to Europe to share some photographs from our holiday in the Dolomites. We spent 6 fantastic days in the Val Gardena and mid-June was the perfect time  for exploring the mountains and valleys at the beginning of the real flush of summer flowers.

We stayed in Ortesei – a popular skiing resort in the winter which lent its infrastructure to summer explorers such as us. Two cablecars and a funicular railway would take you up to 2,500m to alpine meadows to the south of the town, pine forests to the north and the scree-slopes below ancient elevated reefs to the west. With the help of these we walked over 100km of trails during out time there and passed through a wide range of habitat with the variety of flora to match.

This was a fascinating experience for me as an ecologist. Firstly, it was an opportunity to see a number of species which I would dearly love to see in the UK, from the much-celebrated lady’s slipper orchid to the delicate lesser butterfly orchid. I also saw a wide range of species I would recognise in the UK only as a garden ornamentals, such as the daphne and orange lilies. Then there were a whole host of species which could be identified to genus through their correspondence with familiar UK species, but which I had never encountered before such as the alpine colt’s foot and the alpine pasque flower. From these examples a naming system occured to me, similar to the way this landlocked ecologist deals with new coastal species. Whereas the prefix ‘sea…’ works with familiar-but-different‘s beside the coast (think sea mayweed, sea holly, sea campion), so the prefix ‘alpine’ often seems to work in the Dolomites! Finally there were utter unknowns which were quite unlike anything I had seen before – spotted gentian and box-leaved milkwort to name but two!

I worked through my charity-shop copy of ‘Mountain Flowers of Europe’, googled latin names of the right genus from the Plant Life of the Dolomites and refered to this excellent blog post. For the last few, I appealed to twitter and as usual for the botanical community there, some incredibly generous and helpful people offered identifications. However this slightly scattershot approach to ID has led to a number of ‘possibly’ and ‘probably’ ID’s whilst others might quite simply be wrong. If you spot anything in the following collection of photographs which looks awry, I would welcome any corrections or confirmations!

I would highly recommend this region, and Ortesei in particular, as an excellent spot for the extensive trails, the beautiful wildflowers and the predictably enjoyable food and drink. And that’s to say nothing of the marmots!

Alternatively, for an armchair whirl through some of the flora which these mountains have to offer, scroll on! 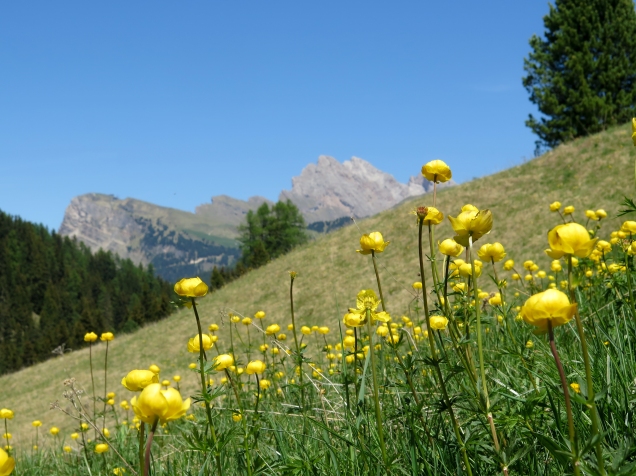 3 thoughts on “Wildflowers of the Dolomites”