We’ve just returned from an amazing couple of weeks spent on and around Vancouver Island in British Columbia and I’m still processing all the sights and experiences. Vancouver island is extensive, BC is huge and Canada is just colossal – I’m aware that we only scratched the smallest surface of this stunning destination but I thought I’d share below a few of the highlights from the trip. First stop, Squamish!

This town is nestled between the mountains and the sea and claims the title of ‘the Outdoor Recreation Capital of Canada‘. I can see why… whilst my fingers itched to join the climbers scaling boulders and pitches all around, we had only a few days and there was adventure enough without taking to the vertical!

The Strawamus Chief hangs above the town and we were lucky enough to have a perfect view of this iconic mountain from our window. At night you could watch the stars wheel overhead whilst mornings would see the peak revealed or otherwise concealed by rolling clouds which permitted glimpses in silhouette before billowing it back into obscurity.

We walked the Chief trail which can take you up to all three consecutive peaks of this enticing prominence. Although time conspired against a view from the peak, the route up from Shannon Falls was spectacular – a combination of natural path and the built elements such as log-steps and boardwalks required to surmount the otherwise impassable. The forest which hugged the base and through which the path ascended was our first real view of the eerily beautiful bryophyte-hung conifers which we were to become familiar with over the next few weeks. 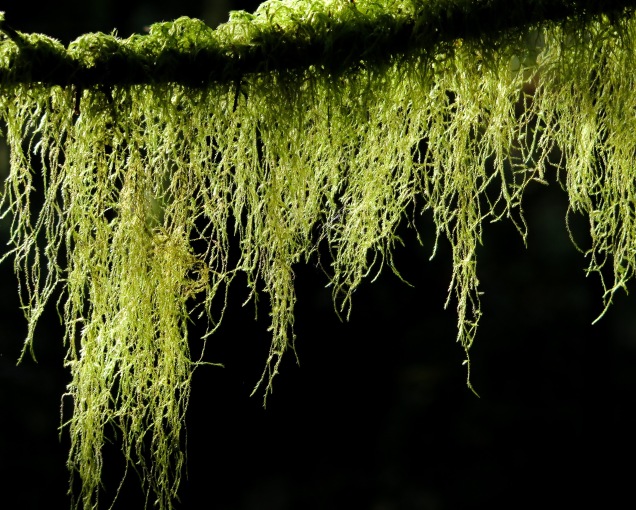 A grey second day took us out along the Mamquam river which empties into the Sound at the foot of the town. The salmon runs were just beginning and we walked through the gravel banks amongst saplings and driftwood to watch their backs breaching the ripples as they spawned in the shallows.

These runs bring the eagles in the winter where thousands can be seen taking advantage of the fish – the record count in 1994 was 3,769! Sadly we were a little too early  as they peak in November.

The salmon die after spawning and we saw many dead along the gravel banks, as well as failing and foundering in the river itself. This seemed a sad sight, but the runs of salmon from the oceans to the rivers, and their subsequent demise in freshwater, are a vital ecosystem function in transferring nutrients from one location to the other. The fish are caught or scavanged by a wide variety of species, from bears and eagles to mink, otter, gulls and vultures. This is transferred to the land through droppings, but also manually moved by bears in particular who will take the fish into the forest but often feed only on the most select parts, leaving the rest to be scavanged or simply to break down and decompose. One study in south-eastern Alaska found that up to 25% of the nitrogen in the foliage of trees was derived from spawning salmon which makes this miraculous migration a key component of the forest ecosystem.

Our stay backed onto Smoke Bluffs and we took a couple of walks in the trails which weave through this forest. With huge boulders scattered amongst the conifers, and no shortage of mountain bikers willing to throw themselves down them, the trails were somewhat more challenging than the average stroll through the woods but all the more exciting for it. Whilst the evidence of others was apparent, we found ourselves alone; the sense of stillness and quiet in those woods was unlike everything I’ve ever experienced, shielded by high canopies above with all sounds softened by the sea of ferns which lapped the edges of the trail. Down low too were some beautiful lichen forests, emulating their larger neighbours in miniature.

One our last day, before heading on to Horseshoe Bay to catch the ferry across to Nanaimo, we caught the Sea to Sky Gondola for a bird’s eye view of the landscape. Sea to Sky is the name of the route and the region, and it’s not hard to see why – the view from the 885m high peak out across Howe Sound shows what a stunning combination of the elements this place is!

At the summit station were creatures which I first thought to be butterflies, but on closer inspection realised were grasshoppers. I think these are Trimerotropis species and their sustained bouts of flight were unlike any I have seen our UK species do. These noisy ascents would last 10 seconds or more and had the air of a display about them – this is something which females of the genus are known to do when receptive to mating. Whilst conspicuous on the wing, they were perfectly camouflaged against the rocks, disappearing if you took your eye off them only to reappear precisely where you left them!

2 thoughts on “Squamish – Sea to Sky”