I left early this morning to give me chance to walk along the Grantham Canal before work – I love the stretch between Grantham and Harlaxton which runs in a cutting, the habitat shifting from open grassy banks to high tree cover as you walk further from the town.

I had a quick game of Wildflower Happy Families along the way – I would say that a course where we were introduced to the 20 most frequently encountered plant families was what really opened up botany to me. Once you learnt a few characteristics, the 1,600+ possible identities for a new flower are narrowed down to a few pages in the wildflower key and learning new species gets a whole lot easier! 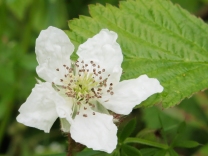 The Rose family – Rosaceae – is one of the larger in the UK ranging from trees such as rowan and cherry, through shrubs such as hawthorn and blackthorn, down to wildflowers such as wild strawberry and agrimony. The guises of rose are varied, but once you key into the characteristics, you’ll start to spot more. Look for five separate petals, multiple stamens and styles, and often a pinnate or palmate leaves with a serrated edge. They also often have stipules – small leafy protrubances – around the base of the leaves. 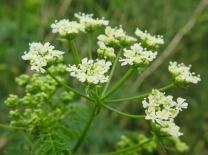 The Carrot family – Apiaciae – is another large family but there is a very definate look to these plants. The most distinctive characteristic is the ‘umbels’ of many white or yellow flowers, each of which has five petals. The leaves are alternate, and often pinnate or deeply divided. 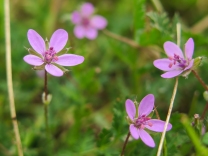 The Geranium family – Geraniaceae – is familiar to many as the ornamentals which are known commonly by the genus name. These flowers often have flowers in pink, purple or blue, each with 5 petals which may be further divided as in the dove’s foot cranesbill above, and which range from small and delicate to showy and impressive. Leaves are compound or lobed with stipules present.

The Deadnettle family – Labiatae – includes some beautiful little flowers; I’m not sure that the hedge woundwort flowers pictured above are any less impressive than a common spotted orchid for example! These flowers have square stems and opposite leaves. The two-lipped flowers are grouped in such a way that they have a whorled appearance and appear in the axils above the leaves. Once the flowers have finished, the four nutlets ripen and sit in the base before they are dispersed, giving the ‘four nuts in a cup’ appearance. 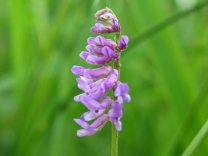 Finally for this little collection taken along the Grantham Canal, the pea family – Leguminosae – is easily identified by the pea-like flowers which have a ‘standard’ petal at the top, two ‘wing’ petals at the side and two lower petals joining to make a boat shaped ‘keel’ at the base. Leaves are usually either trifolate – as in clover – or pinnate – as in the vetches, some of which have tendrils at the tips.

I actually had a little help in locating the meadow vetchling – I watched a common carder bee visiting the common vetch flowers before buzzing off into the undergrowth so I followed to see what it had found and sure enough, it had sought another member of the same family which I hadn’t noticed until then!

Wildflower Happy Families is a great game for any walk – see how many species belonging to the same family you can spot. It helps get your eye in to the characteristics of the families and then you start to notice the differences which let you narrow down to species.