I like to take the opportunity which the end of the year presents to look back over what I’ve seen and encountered. Some fall nicely into groups so do check out trees, wildflowers, butterflies, bees and invertebrates on their own posts!

The remainder are individual species or places which don’t form a group, but which are an important part of the year just passed. I hope you enjoy!

I was lucky to be invited along to a hibernation check in the caves in Easegill, Cumbria by a friend in the bat group there. We found a number of hibernating myotis and brown long-eared bats in the various cave systems, along with the tissue moths, herald moths and cave spiders which use the same habitats over winter. It was a great day out in some stunning scenery, and the opportunity to do a spot of caving whilst searching for wildlife was a real treat! You can read more, and watch a short compilation video, on this post from January 2017. 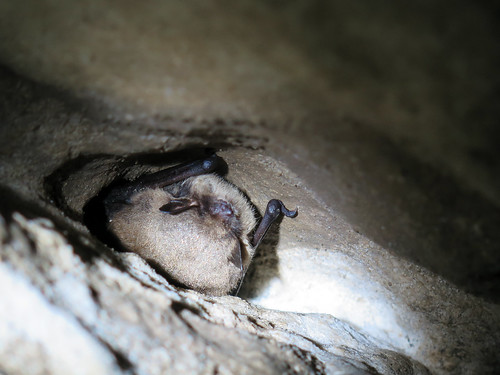 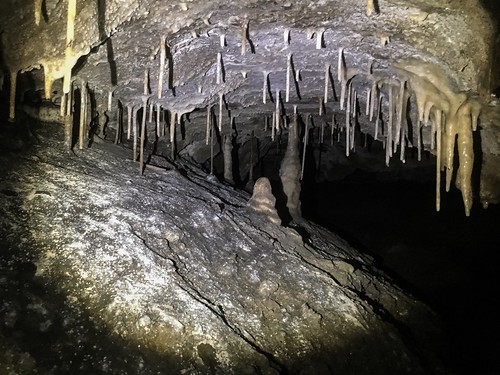 It takes around an hour and a half for us to get to some of the most stunning walks in the Peak District; a bit of a trek but always worth the visit especially if there’s snow to line the fields and de-mark the landscape with its series of hedges and stone walls. I love too how the hills in the far distance can give an illusion of mountains when they become snow-covered! 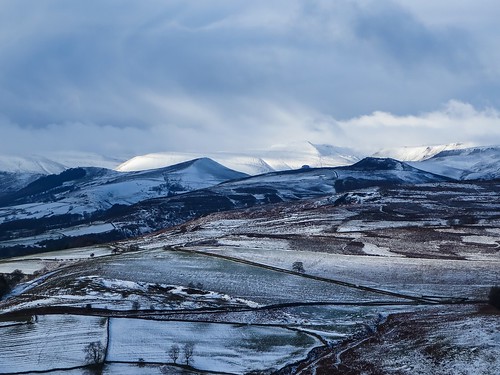 I couldn’t resist this photograph when we were undertaking translocations at the beginning of the year. The legislative driver behind the translocation is the great crested newt, but we take the opportunity to move any species we encounter to a place of safety. With the juveniles, such as this little smooth newt, you need to keep a sharp eye to make sure you spot them all! 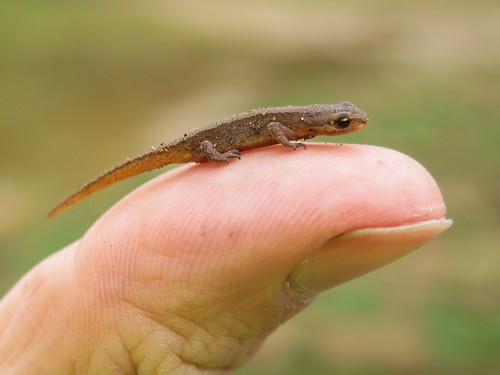 Spring is one of the most rewarding times to have a garden pond – when the croaking begins and the surface is a mass of calling frogs. This was taken on a cool March day when the frogs had decided that spring had sprung! In this photo, I tried to capture the turbulence of the water which these amorous amphibians bring to a placid garden pond. 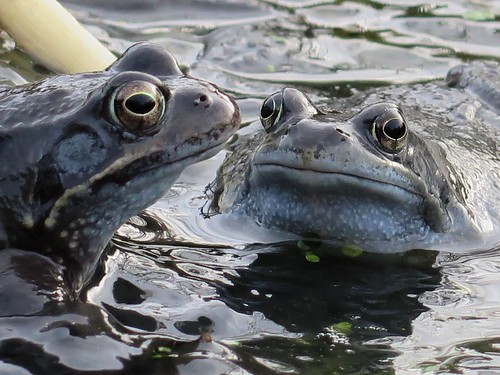 We encountered this slow worm under a piece of corrugated metal in the woods near Woodhall Spa in the early summertime. There had been a rainshower which caught us out and the slow worms too had taken shelter. As the sun came out and the corrugated metal began to warm, the chances of catching one reduced significantly as they are anything but slow when they want to be! These reptiles are in fact legless lizards rather than snakes. Their habit of sheltering beneath these artificial refugia forms the basis of the reptile survey technique we use in ecological consultancy to find out whether reptiles are present on a particular site. 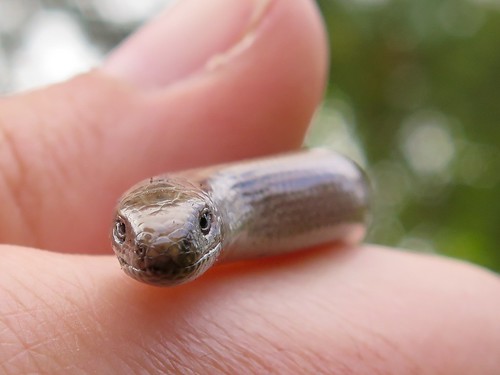 Dandelion seedhead before the full moon

The was taken at Muston Meadows at midnight when the moon was full and I couldn’t resist a walk. The dandelion seedheads glowed white against the dark grass but I was struggling to capture this in a photograph – then I thought this might make an interesting angle! 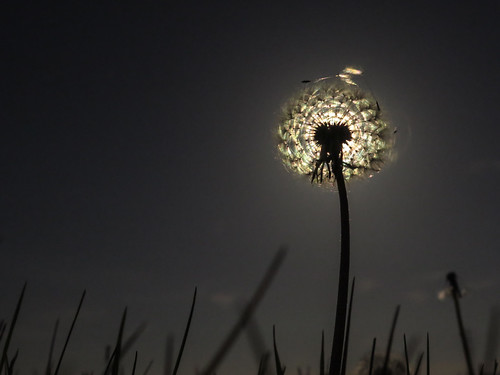 We spent a few days over the May bank holiday in Ireland for a wedding, coming back via Anglesey and spending a night in Shropshire on our way back east. We walked over the Long Mynd at dusk, heading back towards our campsite, and this was the view as we began to descend. 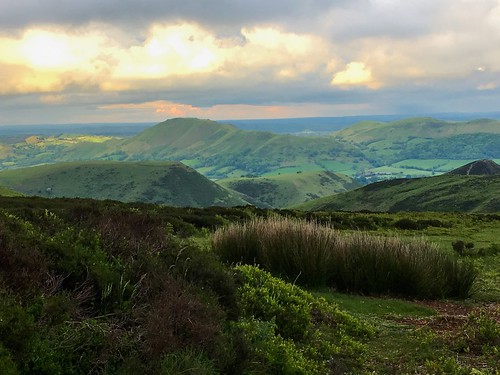 A weekend camping near Robin Hood’s Bay in the summer found us in Whitby before walking back along the coast. This is the taken at the Church of Saint Mary – set above the town and referenced in Dracula. I was struck with this view of the tombstones dark against the long meadow grasses and wished this was a more common sight – cemeteries and churchyards can be beautiful places full of life after death, if they’re managed sensitively for wildlife rather than manicured as bowling greens! 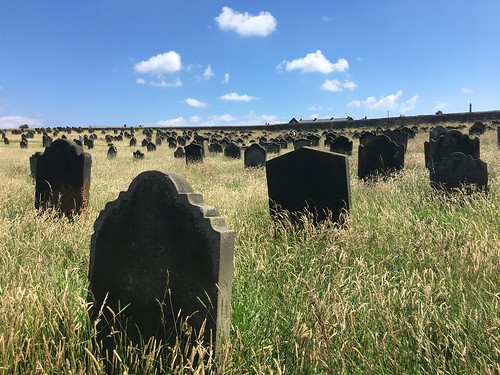 We had a survey site which saw me out in the Peak District until 7pm one evening in August – after which I took the opportunity to see the heather and take a walk along Curbar Edge at sunset. This is the view out across from the Edge as the sun was sinking low on the horizon. 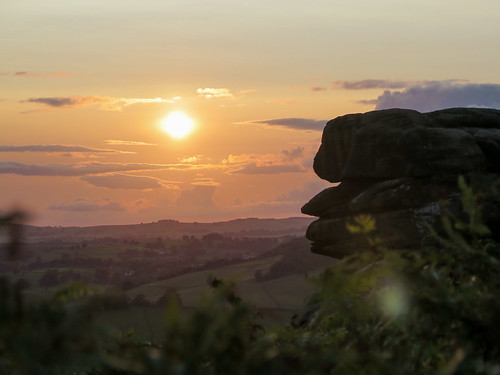 The following are a few photographs from Vancouver Island this year – we encountered some spectacular wildlife and were amazed by the scenery. You can read more in my blog posts here, but below are a few highlights. 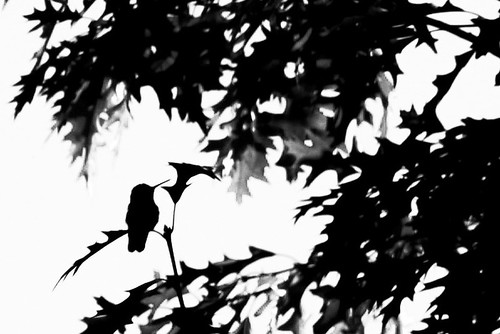 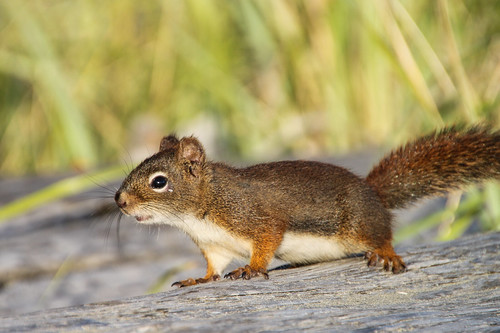 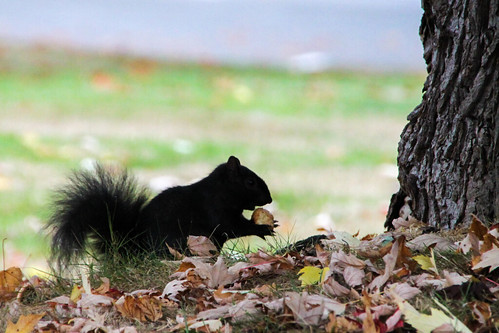 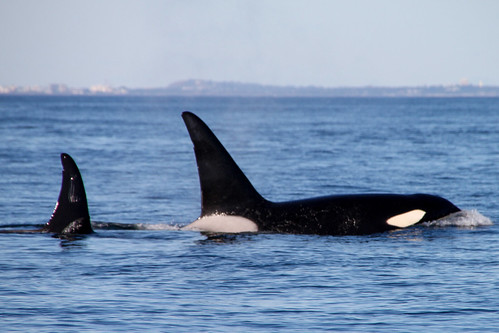 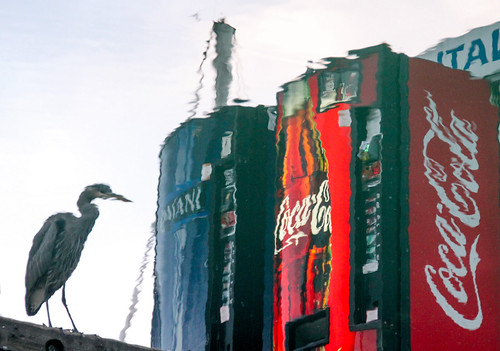 This tiny slow worm was one of this year’s juveniles – we were surveying a site in Somerset and this was one of seven young ones which appeared under a single survey mat where the sun warmed a bank at the edge of the site. When I picked it up, it wrapped itself around my finger but was so small that the nose and tail didn’t quite meet! 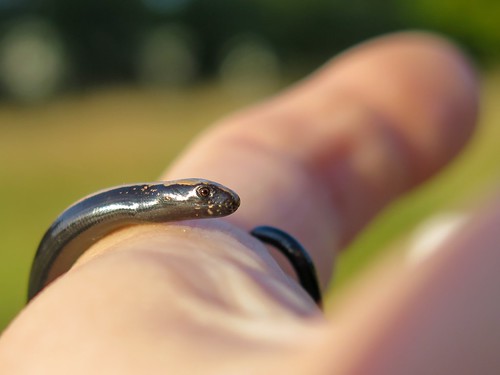 Sunrise on the day of Storm Ophelia

This photograph was taken of the countryside in Warwickshire on the day Storm Ophelia swept across the UK. At that time, I didn’t realise what was causing the effect but was just taken by the colours – it turned out that the day was to be filled with the pseudo-apocolyptic light brought on by the Sahara sands. 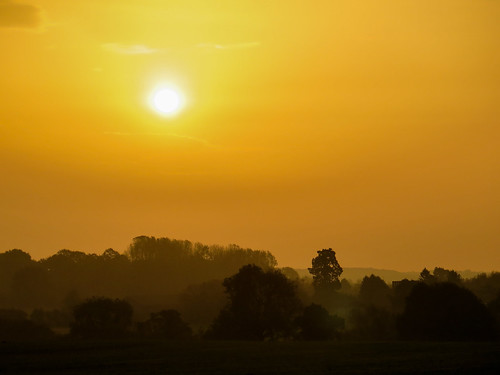 Muston Meadows is an ancient haymeadow and a National Nature Reserve in Leicestershire. The site is managed with a late-summer hay cut and is grazed in the winter by cattle. I visited one frosty morning in December and they were delighted to have a visitor, charging over before stopping and checking me out. They then accompanied me all the way off the site so perhaps their role is security as well as site management! 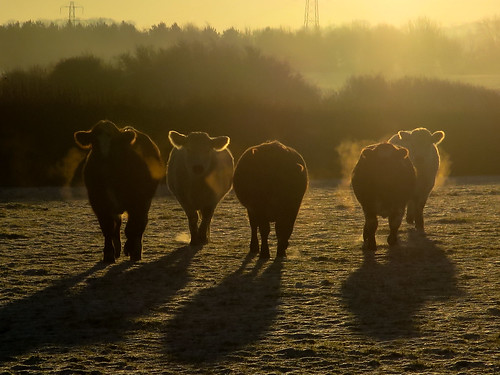 On a snowy cold day in December, I took a walk through the white from the Longshaw Estate in Derbyshire, through woodland and across tors and encountering these beautiful icicles hanging beneath the bridge which takes the road over Burbage Brook. 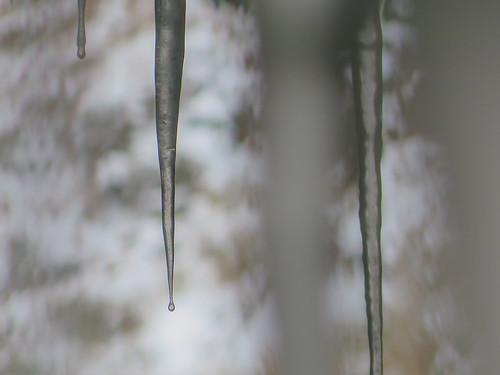 These are also commonly known as old man’s beard and it’s easy to see why! I came across these seedheads in a hedgerow on a survey site in Bedfordshire where the wind had left them with this shape over time – I liked the feeling of motion which they held  even when still. It seemed appropriate for seeds which are waiting for their time to take to the wind and begin a new plant elsewhere in the landscape. 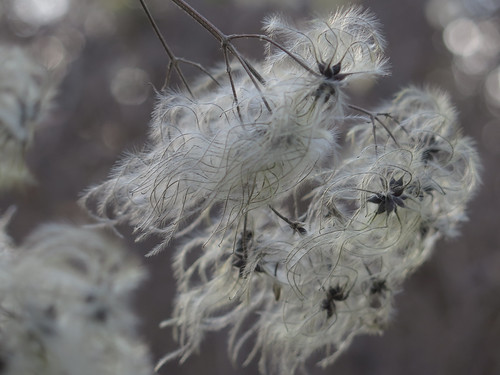 On the same site as the clematis above, I also found an amazing stand of teasel seedheads. These striking plants are excellent for wildlife – in the summer they provide an abundance of nectar for pollinators such as bees and butterflies, and the winter seedheads will play host to flocks of goldfinches foraging for the seeds. 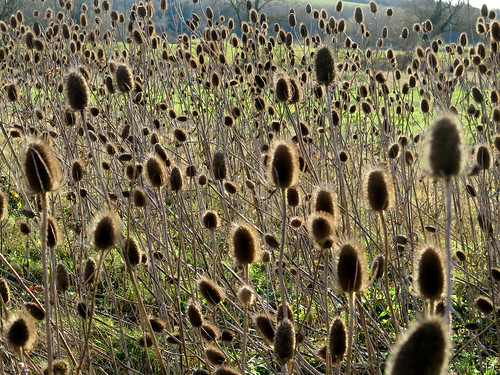 Last Sunday was one of those beautiful days when everybody feels spring is just around the corner. The garden was filled with birdsong and sunshine, neighbours decided it was finally time to venture out and sweep those autumn leaves, daffodil bulbs bulged yellow at their tips where flowers are just waiting to appear.

What better day to descend into a sealed up tunnel, feeling the temperature drop steadily on a headlamp-lit thermometer, to search for hibernating bats!? Along with another member of the Lincolnshire Bat Group, we gallantly left the sunlight behind to see what we could find.

In the past we have come across hibernating barbastelle bats, a rare species in the UK and here, at almost the northerly limit of their range, but sadly this time they were absent from the deep cracks which staircase down the brickwork where the tunnel curves.

Several years ago the Bat Group put up boxes in the tunnel, to provide a greater range of roosting opportunities and in here we did find some bats – two boxes had brown long-eared bats sleeping soundly inside, their long ears tucked behind their wings with only the tragus – the fleshy projection within the ears – apparent.

Only one of these bats was present during the January survey which means that some time in the last month, the other has flown and found this as a new place to enter torpor. This is not uncommon, bats will rouse during warmer winter weather and will often feed briefly before returning to their torpid state.
Along with the bats were around 60-70 peacock butterflies, all with their wings tightly closed and apparently oblivious to our torchlight as we passed by, careful not to disturb them. Many had damaged pieces of wing from last year – the first butterflies of the year are often tattered old veteran tortoiseshells, peacocks and brimstones.

A number of herald moths were also present, including the pair pictured below who appeared to be hibernating upon a spiders web! I would love to hear any feedback on this interpretation – I do not think they have fallen prey to the spider as this same pair were present last September when I checked the boxes were ready for the winter and are apparently still alive and well! They will take flight when the weather warms, sometime between March and May.

If you are interested in joining the local bat group, visit their webpage for details – there are events throughout the year that you can take part in. For details of your local group if you are outside of Lincolnshire, the BCT webpage has all the info.

A recent trip to look for bats in Harlaxton railway tunnel didn’t reveal any – it’s still a little early for them to be hibernating – but plents of moths and butterflies were preparing to hibernate for the winter. The tunnel gets cold but the conditions are stable and this allows the insects to enter a torpid state until the weather warms up again. Herald moths prefer dark places and where you find them, the chances are conditions will be good for bats too! Several of the herald moths were hibernating on old spider’s webs – this isn’t something I’ve seen before but seemed to be a populat location, at least half of them were hanging in this way. The peacock butterfly was recently arrived as he was still quite active, flapping his wings slowly when the torch fell upon him, but plenty more had their wings folded tight and looked set to sleep out the winter already!