The most recent issue of the Harlaxton Voice, the monthly newsletter for the village of Harlaxton a couple of miles to the west of Grantham, outlined the issues raised by the ‘Best Kept Village’ inspectors in 2012. Amongst their criticisms (although they were overall very impressed with the village), was the number of weeds. Many people may agree but I would offer a different view; I would hope that the village does not take this complaint too much to heart.

I took a walk around the Harlaxton between the rain showers today for a quick survey of the unauthorised village vegetation. There are garden escapee’s; valarian growing in the walls, forget-me-nots forgetting to keep within the beds they were planted in, yellow corydalis and the beautiful and characteristic aubretia which bubbles and tumbles down the walls as you drive through. I would suspect that the committee would approve of these plants, they look sufficiently ornamental and their establishment within the village adds to its character.

Then there are the colourful flowering species which may split opinions a little further; dandelions imitating the sporadic sun in the otherwise dismal tarmac, broad-leaf willow herb, purple-flowered violets, buttercup-yellow lesser celandines, yarrow, herb-robert and purple toad-flax. These all take foothold in tiny patches of soil where you would never expect a planted seed to grow; they live against the odds where little else could. My personal favourite is the exquisite creeping toadflax which creeps out of the gaps in the walls and trails down, a native accompaniment to the bolder aubretia.

Finally are those which would be sprayed off by most without a second thought; spear thistle, common chickweed, groundsel, cleavers, bittercress and ivy-leaved speedwell. These do flower but generally they are so small and unappealing to the casual observer that they would be dismissed as scrubby vegetation. But look a little closer and these too are beautiful plants.

Weeds are defined as plants in the wrong place but the wrong place depends upon the viewpoint of the observer. There is no reason why our pavement edges should be sprayed clean of those opportunistic plants which have found a way to take a temporary root, add splashes of green to the tarmac and provide nectar sources for pollinators such as butterflies and bees. The inspection committee were pleased with the ‘tended beds’ – small squares of soil with specimen plants placed in the centre which I personally find rather dull. Are the daisy’s in the grass considered weeds? Some would say yes, some would say no. Weeds are a matter of aesthetics and I would hope that the village does not pander too much to the view of the itinerant inspectors who will not be visiting again for another year. I would say that the right place for our native wildflowers is wherever they can survive in our otherwise often too inert landscape but I suspect this is a minority viewpoint. 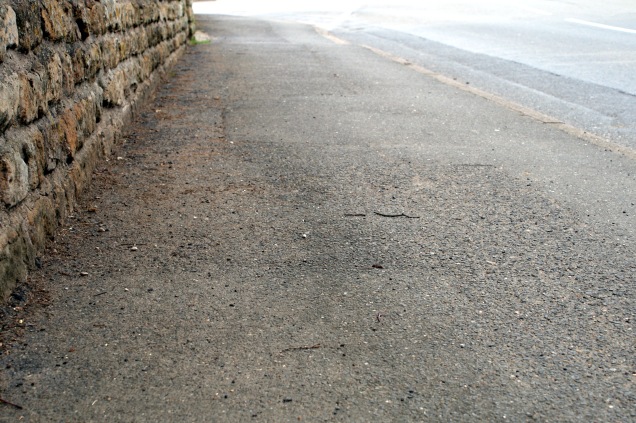 This is a common blue butterfly nectaring on a daisy just outside our yurt here on the vineyard - I can’t tell you how good it is to step out of the door into a mini meadow each morning! Whilst the adults feed on various flowers, the caterpillars feed on members of the pea family, especially bird’s foot trefoil which grows in abundance between the vines on our south facing slopes!
These sheep’s sorrel flowers are subtle and understated but have a beautiful architecture up close. They grow to around a foot high and make a shimmering haze of red beneath the vines here on the vineyard #wildflowerhour #wildflower #stmartins #scilly #stmartinsvineyard
Close-up of dwarf mallow flowering here on the vineyard #wildflowerhour #stmartins #scilly
I'm used to seeing bluebells beneath a canopy of oaks, so it's a strange adjustment to find them surrounded by buttercups, plantains and trefoils in the grasslands where they occur here on St Martin's, Scilly #wildflowerhour
Buff tailed bumblebee workers busy amongst the small-flowered catchfly here on the vineyard today #stmartins #scilly #stmartinsvineyard
These scarlet pimpernel have really made a show of themselves in the last week, flowering between the vines here on St Martins, Scilly #stmartins #scilly #wildflowerhour
Small flowered catchfly soaking up the last ray of evening sunshine here on the vineyard on St Martins, Scilly
Bee ballet - the Alexanders flowers beside the vineyard are buzzing with native pollinators and honey bees right now! #honeybee #bees #stmartinsvineyard #stmartins #scilly
Small flowered catchfly - a diminutive member of the campion family - flowering amongst the naturalised Bermuda buttercup on St Martins Vineyard this afternoon - this is a red-listed species in the UK which still thrives in cultivated fields here on Scilly #wildflower #wildflowerhour #stmartins #scilly #stmartinsvineyard
Force 10 winds today made for an invigorating walk to the eastern edge of St Martins! Great fun to watch birds like this oystercatcher zip past when with the wind, then labour for a small eternity trying to fly back again!
A queen bumblebee on fumitory flowers growing between the vines on St Martins Vineyard, Scilly #stmartins #scilly #bumblebee
A brief break in the wind and a little spring sunshine brought the solitary bees and hoverflies out today - this Eristalis hoverfly amongst them #hoverfly #scilly #stmartins
Some late February sunshine saw the queen bumblebees out of hibernation and on the wing - these will go on to establish nests and create a new generation of bumblebee workers to fill the flowers this summer! #bumblebee #stmartins #scilly #spring
Daffodils bringing a most welcome splash of colour in the late February sunshine!
New flowers in a new home - three cornered leek flowering in abundance on St Martin’s vineyard in the beautiful Isles of Scilly!
Snowdrops in #grantham cemetery #snowdrops
Snowdrops in the sunshine in #Grantham cemetery #spring #snowdrops
Snowdrop flowering in #Grantham cemetery - one of my favourite places to get a sneak preview of spring on a January afternoon #snowdrop
Snowdrops getting ready for spring in spite of the return of the cold, foggy wintery weather today #snowdrop #spring
Arc of stars over Fivizzano #starlapse